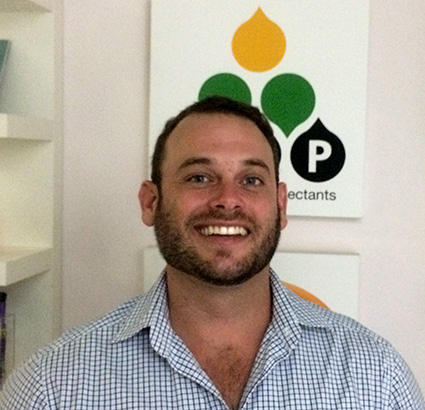 It’s with excitment that OCP announces the appointment of Jason Vella who took over the role of Territory Manager Qld/Nth NSW from Andrew Woodford on 2nd Nov. 2015.

Jason is a native Queenslander having grown up in the cattle and cane fields (no he does not like “The Go Betweens”) of FNQ’s Mackay area. After high school Jason worked on the family farm for a while until he decided it was time to get more serious about his Agricultural career. This saw Jason move down to Southern Qld to study at Qld University – Gatton Campus. Soon after arriving Jason took on a part-time job with a major horticultural machinery company (Norseman Machinery) while completing his  Bachelor of Applied Science in Agronomy. After graduating Jason went to work for Total Grower Services (TGS) as a field agronomist working with progressive growers in the Lockyer/Darling Down districts.  After two years with TGS Jason moved on to a more senior agronomy role with Farm Chem which he held up until recently.

Jason joins OCP at a time of significant growth and we wish Jason all the best in his new role with us in the Sunshine State! I am certain with Jason’s very cheerful personally, typically hardworking rural  attitude mixed with an excellent knowledge base, Jason will kick many professional goals with OCP. Welcome Jason!