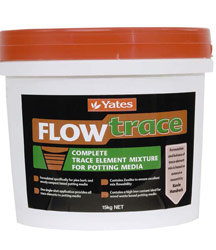 The iron, copper and zinc will remain in plant-available form for many years, provided the pH of the medium remains within the range 5 to 6.4. An increase above pH 6.4 may reduce supply of these trace elements to some plants. There is no need to repeatedly add further amounts of these trace elements for most plants (zinc for citrus is an exception).

The added molybdenum will also remain available for many years.

Under non-leaching conditions, the added manganese and boron will also remain available for several years, but when pots are constantly leached through excessive applications of irrigation water, both of these trace elements are slowly leached from potting media. However, even in the “worst-case” situation of heavy leaching, the amounts of manganese and boron added by the recommended FlowTrace addition will last for one year.