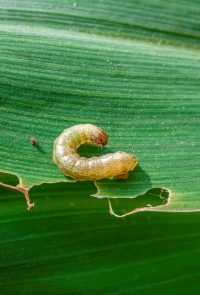 Since the discovery of  Fall armyworm  (Spodoptera frugiperda) on the  Australian mainland in February 2020, FAW has left a trail of destruction across many of our economically significant crops. Industry and Government have acted quickly in an attempt to support growers to deal with this pest.  OCP also responded quickly by making available lures and traps to monitor for the presence of the pest while engaging with our innovative Tech partners at Andermatt Biocontrol & ISCATech to come up with a suite of IPM focused options.

As a global leader in insect virus products like Helicovex®, Andermatt Biocontrol  continues to work on the discovery and supply of the latest biological controls including SfNPV called Spodovir® Plus. This virus is highly selective to FAW and work in Canada is demonstrating very good efficacy against this pest. We are excited to announce that OCP have recently obtained AQIS clearance to test Spodovir Plus in Australia with the support of QLD DPI. OCP is also working with Andermatt and AQIS to allow us to access another potential  biological control option based on Metarhizium rileyi called Nomu-Protec®. This product is a naturally occurring entomopathogenic fungi which will be an excellent biological control partner with Spodovir Plus.

Controlling FAW comes with many challenges simply due to the intensity of the population pressure. One of the ways to deal with the population  is to kill the moths before they can produce any offspring. ISCATech and OCP have been investigating the supply and use of their product ACTTRA® FAW, which has demonstrated amazing results in Bt Corn in Brazil both on its own and in combination with ISCATech’s mating disruption product SPLAT® FAW. ACTTRA FAW is highly attractive to FAW and when mixed with an appropriate toxicant, is highly efficacious against FAW moths. We are currently working on trial protocols and working with industry for access to Minor Use Permits for appropriate toxicants. Watch this space for further updates!